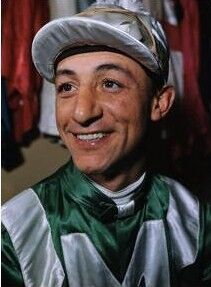 George Edward Arcaro (February 9, 1916 - November 4, 1997), known professionaly as Eddie Arcaro, was an American Thoroughbred horse racing Hall of Fame jockey who won more American classic races than any other jockey in history and is the only rider to have won the U.S. Triple Crown twice. He is widely regarded as the greatest jockey in the history of American thoroughbred horse racing. Arcaro was born in Cincinnati, Ohio, the son of an impoverished taxi driver. Eventually nicknamed "Banana Nose" by his confreres, Arcaro won his first race in 1932 at the Agua Caliente Racetrack in Tijuana, Mexico. In 1934, the inaugural year of Narragansett Park, Arcaro was a comparative unknown who rode many of his early career races at 'Gansett.

Arcaro won his first Kentucky Derby in 1938 aboard Lawrin. He is tied with Bill Hartack for most Derby wins with five, and has the most Preakness and Belmont Stakes with six. He won the U.S. Triple Crown in 1941 on Whirlaway, and again in 1948 on Citation. His other Kentucky Derby wins were Hoop Jr. (1945) and Hill Gail (1952).

Arcaro also won the Suburban Handicap eight times, the Wood Memorial Stakes nine times, and the Jockey Gold Cup ten times. In international competition, at Woodbine Racetrack in Toronto, Arcaro won the 1953 Queen's Plate (Canada's most prestigious race); at Laurel Park Racetrack in Laurel, Maryland, he won the 1954 Washington, D.C. International against the best horses and riders from Europe. In 1953, Arcaro was voted the George Woolf Memorial Jockey Award, and in 1958 was inducted into the National Museum of Racing and Hall of Fame in Saratoga Springs, New York.

Active in jockey affairs, Arcaro was a driving force behind the creation of the Jockey's Guild. He retired in 1962, due to severe bursitis in his arm. During his career, Arcaro rode in 24,092 races and won 4,779, with record earnings of $30,039,543. After working as a television commentator on racing for CBS and ABC, he was a public relations officer for the Golden Nugget Casino in Las Vegas before retiring to Miami, Florida. He also worked as a spokesman for the Buick Motor Division of General Motors, for which he voiced the well-known phrase "If you price a Buick, you'll buy a Buick." For many years, he was the proprieter of a popular Italian restaurant in Beverly Hills.

Eddie Arcaro died in 1997. His body was cremated and his ashes were inurned in the columbarium at Our Lady of Mercy Catholic Cemetary in Miami. Today, he remains one of the best-known jockeys in the history of horse racing, called "The Master" for his riding skills, good sense of pace, and the ability to switch his whip from one hand to the other with ease during a race.