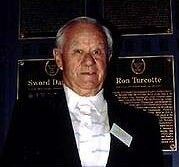 Laurin's career in thoroughbred horse racing began in 1929 as a jockey at Blue Bonnets Raceway in Montreal, Quebec. Battling weight problems, after riding 161 winners, in 1942 he began working as a trainer in New England in a job that would span 45 years and take him to the pinnacle of racing success. While working for two different stables, he enjoyed a long and successful association with owner

Reginald N. Webster. For Webster, Laurin trained a number of winners, including Quill, the 1958 American Champion Two-Year-Old Filly, and Amberoid, winner of the 1966 Wood Memorial Stakes and Laurin's first win in an American Classic, the Belmont Stakes.

His son, Roger Laurin, worked as a trainer at Christopher Chenery's Meadow Stable, and when he accepted an offer to work for Ogden Phipps, suggested that his father might help out at the Meadow on a temporary basis. Coming out of retirement in 1971, Laurin went to work at the Meadow for what was supposed to be a temporary period. At that time, the stable was having financial difficulties, but things would soon change. With their colt, Riva Ridge, earning more that $500,000 and being named American Champion Two-Year-Old Colt for 1971, Lucien Laurin and the Meadow Stable would become the number one stable in racing in the country, winning five of six Triple Crown races from 1972-1973.

With Ron Turcotte in the saddle, Riva Ridge won the 1972 Kentucky Derby and Belmont Stakes; had it not been for a muddy at Pimlico, he might have won the Triple Crown. For 1972, Lucien Laurin was named the National Racing Association Eclipse Award winner as North America's most outstanding trainer. However, despite all of this success, he is best known as the trainer of Secretariat, 1972 Champion Two-Year-Old Colt, and American Horse of the Year in 1972 and 1973, and winner of the 1973 Triple Crown, ranking second on the Blood Horse List of the Top 100 Racehorses of the 20th Century.

Lucien Laurin retired from racing again in 1976, but again returned in 1983 as a trainer and part owner of Evergreen Stable. In all, he had trained a total of 36 stakes winners, and was inducted into the National Museum of Racing and Hall of Fame in 1977, and the Canadian Horse Racing Hall of Fame a year later.

Lucien Laurin was living at his home in Key Largo, Florida, when he died in 2000 from complications following surgery to repair a fractured hip.